Antoine Bouvard was a French landscape artist who notably often painted under the pseudonym Marc Aldine. Bouvard remains best known for his renderings of Venetian canal scenes, painted in warm tones and a hazy light that often accompanies the setting of the sun. A typical work is A Gondolier Before a Venetian Bridge, depicting the grand canal of the famous Italian city in a realist style that remained popular with tourists throughout his career. He was notably influenced by the French painter Félix Ziem, who was also popular for his poetic depictions of maritime scenes and port cities. Bouvard was born in 1870 in St. Jean-de-Bournay in L’Isere, France, and went on to study at the Academy of Beaux-Arts in Paris, befriending the French architect Constant-Dufeux who helped shape his career and aesthetic. He eventually became the director of architectural services for the Seine in tandem with his painting career, and is accredited with the construction of the Bourse du Travail in Paris. Though the artist remained based in Paris, he traveled frequently to Italy to paint Venice from observation, preferring to sell his work through dealers rather than having a public life. His son, Noel Bouvard, followed in his footsteps to become a landscape painter in a style similar to his father’s. The senior Bouvard died in 1956. 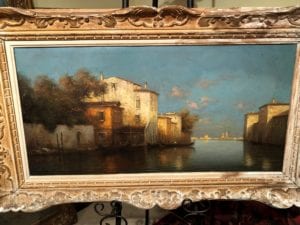 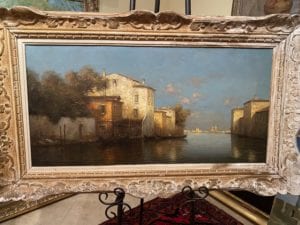