George Sand[6] – known to her friends and family as “Aurore” – was born in Paris and was raised for much of her childhood by her grandmother Marie-Aurore de Saxe, Madame Dupin de Francueil, at her grandmother’s house in the village of Nohant, in the French province of Berry.[7] Sand inherited the house in 1821, when her grandmother died; she used the setting in many of her novels.

Her father Maurice Dupin was the grandson of the Marshal General of France, Maurice, Comte de Saxe, an out-of-wedlock son of Augustus II the Strong, king of Poland and elector of Saxony, and a cousin to the sixth degree to Kings Louis XVI, Louis XVIII and Charles X of France.[8] She was also more distantly related to King Louis Philippe of France through common ancestors from German and Danish ruling families. Sand’s mother, Sophie-Victoire Delaborde, was a commoner.[citation needed]

Sand was one of many notable 19th-century women who chose to wear male attire in public. In 1800, the police issued an order requiring women to apply for a permit in order to wear male clothing. Some women applied for health, occupational, or recreational reasons (e.g., horseback riding), but many women chose to wear pants and other traditional male attire in public without receiving a permit. They did so as well for practical reasons, but also at times to subvert dominant stereotypes.[9]

Sand was one of the women who wore men’s clothing without a permit, justifying them as being less expensive and far sturdier than the typical dress of a noblewoman at the time. In addition to being comfortable, Sand’s male attire enabled her to circulate more freely in Paris than most of her female contemporaries, and gave her increased access to venues from which women were often barred, even women of her social standing. Also scandalous was Sand’s smoking tobacco in public; neither peerage nor gentry had yet sanctioned the free indulgence of women in such a habit, especially in public (though Franz Liszt‘s paramour Marie d’Agoultaffected this as well, smoking large cigars).

While there were many contemporary critics of her comportment, many people accepted her behaviour until they became shocked with the subversive tone of her novels.[5]Those who found her writing admirable were not bothered by her ambiguous or rebellious public behaviour. Victor Hugo commented “George Sand cannot determine whether she is male or female. I entertain a high regard for all my colleagues, but it is not my place to decide whether she is my sister or my brother.”[10] 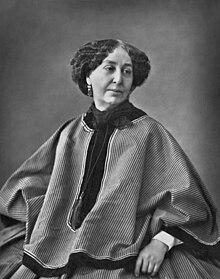 Sand spent the winter of 1838–1839 with Chopin in Mallorca at the (formerly abandoned) Carthusian monastery of Valldemossa.[16]The trip to Mallorca was described in her Un hiver à Majorque (A Winter in Majorca), first published in 1841.[17] Chopin was already illwith incipient tuberculosis at the beginning of their relationship, and spending a cold and wet winter in Mallorca where they could not get proper lodgings exacerbated his symptoms.[18] They separated two years before his death for a variety of reasons.[19]

In her novel Lucrezia Floriani, Sand used Chopin as a model for a sickly Eastern European prince named Karol. He is cared for by a middle-aged actress past her prime, Lucrezia, who suffers a great deal through her affection for Karol.[20] Though Sand claimed not to have made a cartoon out of Chopin, the book’s publication and widespread readership may have exacerbated their later antipathy towards each other. 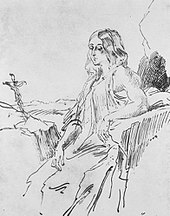 Sand as Mary Magdalene in a sketch by Louis Boulanger

The tipping point in their relationship involved her daughter Solange.[citation needed] Chopin continued to be cordial to Solange after Solange and her husband Auguste Clésinger had a falling out with Sand over money. Sand took Chopin’s support of Solange to be extremely disloyal, and confirmation that Chopin had always “loved” Solange.[21]

Sand’s son Maurice also disliked Chopin. Maurice wanted to establish himself as the “man of the estate” and did not wish to have Chopin as a rival. Chopin was never asked back to Nohant; in 1848, he returned to Paris from a tour of the United Kingdom, to die at the Place Vendôme in 1849. Chopin was penniless at that time; his friends had to pay for his stay there, as well as his funeral at the Madeleine. The funeral was attended by over 3,000 people, including Eugène Delacroix, Franz Liszt, Victor Hugo and other notables. George Sand was notably absent.[22]

Sand died at Nohant, near Châteauroux, in France’s Indre département on 8 June 1876, at the age of 71. She was buried in the private graveyard behind the chapel at Nohant-Vic.[23] In 2003, plans that her remains be moved to the Panthéon in Paris resulted in controversy.[24][25]

This article was sourced from Wikepedia